The cats can no longer be tanked by the rocks or on mushrooms to avoid the leap.

You can pull cats through the vines (after killing the bear) to make it safer when you do the skip by jumping down.  Here is the spot: 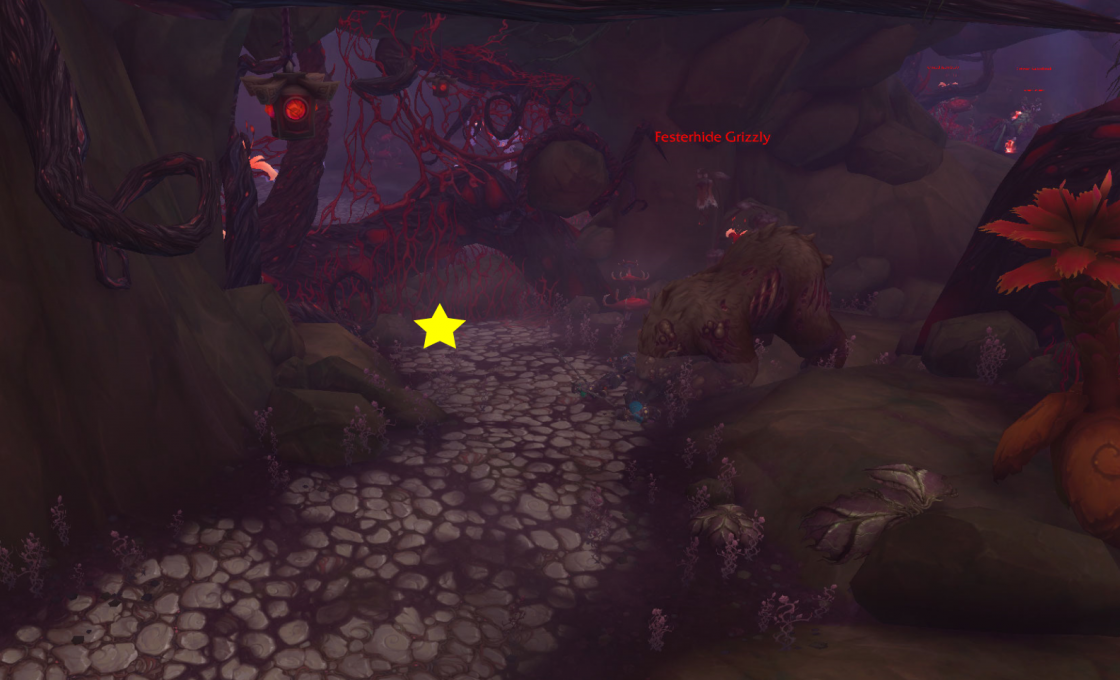 You can pull the bears into the alcove on the right to avoid picking up the pat with the bears.

The Maddening Roar can be outranged.

You can avoid doing the bears right before the boss by using rogue stealth to avoid.  Make sure one person goes ahead to start the RP as well.

Alternatively, the tank can pull the bears to the right, the rest of the group hugs left and runs alongside the bubble wall until it breaks to get into boss room, then the tank dies and gets a rez.

Assign one player to be the soaker for Grievous Leap, preferably one with a bit more survivability, and ensure they stay behind other players.  This will prevent one of your squishier players from being targeted.

You DO NOT want the bait player to be at max range, as this will cause boss to be out of range longer for melee.

Don’t have your range stand on or very close to the boss as that will result in Nightfall landing in melee.

Nightmare Corruption adds can be CCd.

Stack close for Strangling Roots for AOE.  You can use things like rogue cloak, hunter turtle and pally bubble to clear the roots.

When the boss targets you, you can use a movement speed ability to get out of the way right before the tank lands on you.

Be careful using AOE trinkets between Oakheart and Dresaron as they can pull whelps very easily.

When you kill these mobs, if you outrange them and do not hit them with any delayed AOE trinkets/spells, the Bloodtained Bursters that spawn do not have to be killed.  Make sure you are killing the Furies off to the side so they can be ignored if you need to run back, otherwise you will need to kill them on a run back.

Warlocks can enslave these pets to increase their dps, which deals a ticking dot on their target.  This mob isn’t in a usual pull.  When you kill Oakheart, you normally follow the path to the left.  Instead, on the path to the right are some mobs, including Tainted Deadeyes, which are demons.  There is also one in the last tunnel to the last boss.  Here is where they are on the map: 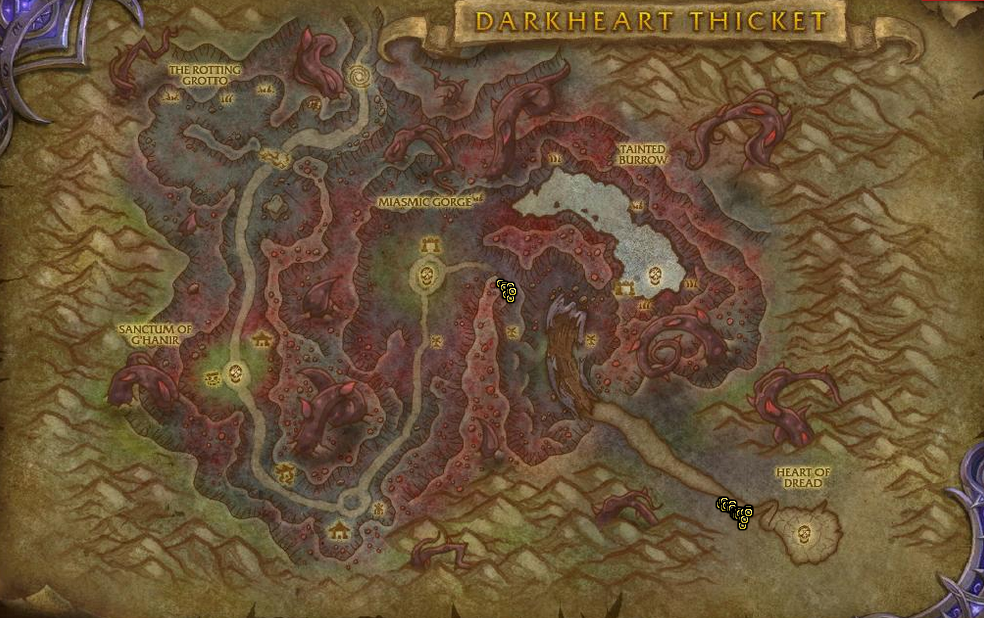 And here they are in the dungeon: 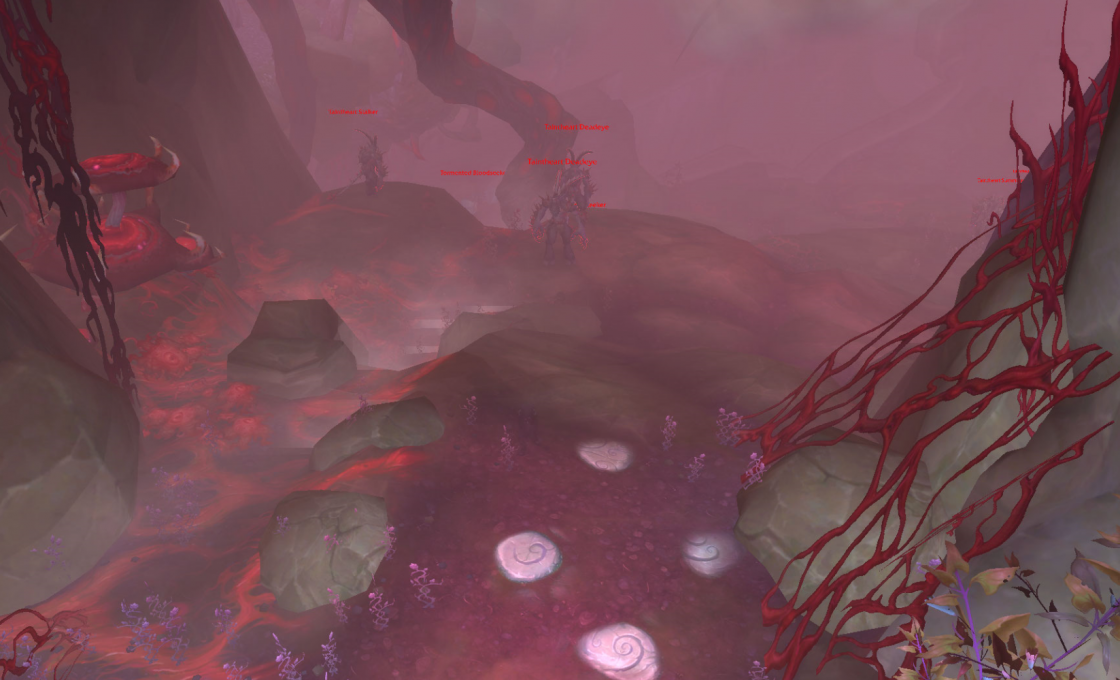 You can pull a couple of whelps on the boss fight for Sephuz procs and for those classes that do more damage with more mobs.  Make sure everyone knows this, bad whelp pulls can cause wipes, and pay attention to affixes before doing it.  This is also a good option for healers who need to heal everyone up immediately following a downdraft before the AOE hits.

The closer you are inside the hitbox of the boss, the less severe the pushback during Down Draft.  You can strafe back and forth to negate this completely if you have some speed increase.  You will want to avoid this position for cave in though.

Any personal and group speed boosts, as well as Warlock Gateway, are pro.

Blizzard’s timers for this boss are often off.  This can be solved by meleeing the boss as the first hit when pulling.

You can skip the last pack by using a rogue’s Shroud of Concealment, making sure to sap the far left add.

Vengeance Demon Hunters can also use Sigil of Misery on that pack.

You can also do a suicide run with soulstone/ankh/pylon.

There is another Taintheart Deadeye here.  If you have a warlock, they can enslave it if they didn’t grab an earlier one.

Nightmare Bolt has a 50y range and can be outranged.  Those with speed move abilities (ie. Blink, Disengage) can move right as the boss casts the bolt, and avoid the bolt entirely.

If you are using any damage reduction CD for Nightmare Bolt, it needs to be used before he finishes casting the bolt.

Feed the Weak can be shadowmelded by Night Elves; Hunters can Feign Death.

Because all the high damage spells are targeted, avoidance won’t give a damage reduction for Feed the Weak or Nightmare Bolt.