The runbacks after the first boss are very long.  Whenever possible, use a Failure Detection Pylon for wipe recovery to save minutes (and accidental deaths from getting too close to the last boss as you run back) from running back

For higher keys, there is debate for which boss to do second, and which to do third (with Hero).

For survivability reasons, some choose Hatecoil third so they have hero to finish the boss quickly, which also means there are no winds during Serpentrix and the seagulls are still up in the air (although they can still be pulled with some spells).

The downside to doing Serpentrix then Hatecoil is that you do lose a lot of time running back and forth and the time lost might not make it worth it.

Throw Spear will target range if there is one.  So if you have only a single range (such as a healer with the rest melee), then that range will get every one.

If tank is positioned close to the wall the Parjesh is doing Crashing Wave towards, and does not dodge it, then the tank can get hit by the wave twice.

Decide ahead of time which adds you will be killing.  Also, CCs can be used on the adds.

If you are an engineer, you can use your parachute cloak to skip over the water from Parjesh without being killed by the adds. 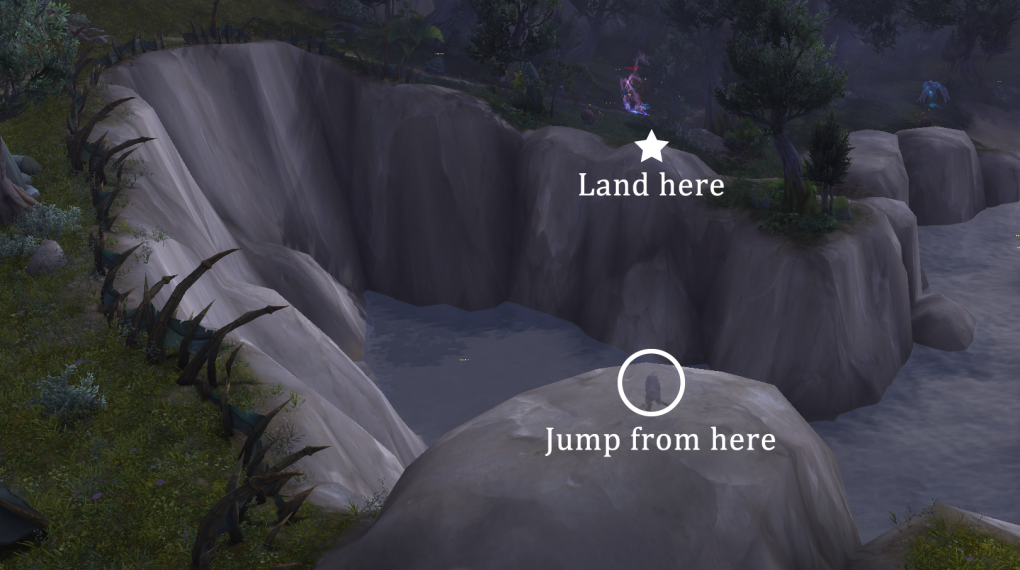 If your group is low on interupts, do not interupt Polymorph: Fish as the healer can immediately dispel it.

Avoid CC a snail to avoid killing it on explosive week, as it will spawn explosives during the fight if still CCd or it hasn’t reset after CC expires.

Be careful jumping between these two rocks, if you miss the jump, you fall in the water where the adds from Wrath of Azshara will instantly kill you.  It is safest to tank/DPS rez from the sand/grass/rocks rather than edging close in the water which can result in your death. 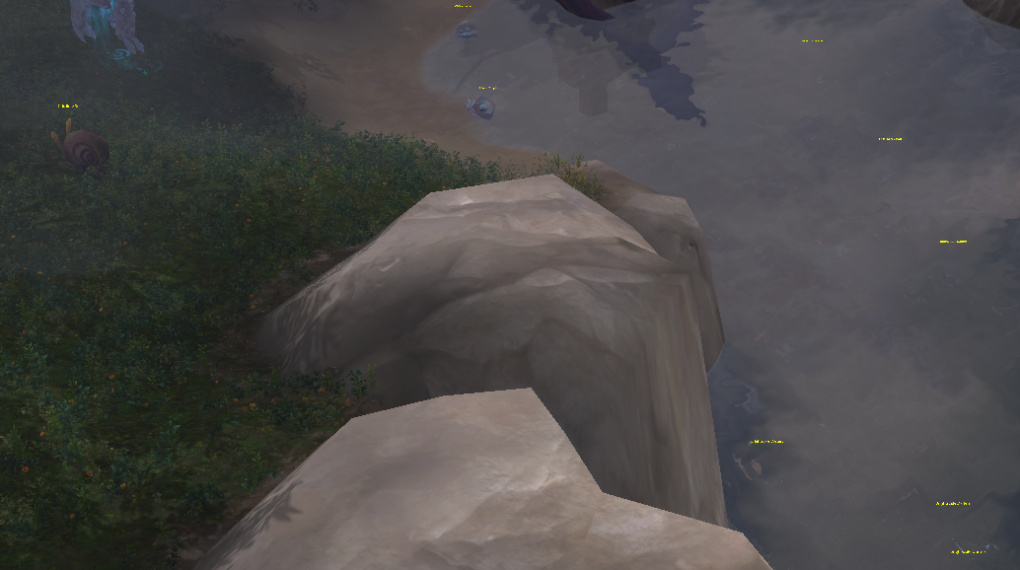 Depending on your health pool, avoidance gear and Prydaz are awesome for this fight, and mandatory for higher keys.

Avoid standing on the islands during Focused Lightning as it will cause the island to disappear and you need as many of them as possible on tyrannical.

Be careful not to blow a player (or be blown) towards Wrath of Azshara as the adds will instantly kill you if you get too close.

For keys where Focused Lightning can be a one shot or close to it, make a plan on how you will be using CDs.  You don’t want to use something like Darkness when everyone else uses their personals, unless it is needed.  Call for when people need to move in for AOE healing and damage reduction.

On volcanic weeks, stand on one side of the island so you can use the other side to dodge if needed.

The Bitterbrine Scavenger on the boat can be a great source of percent.

Beware of pulling seagulls, if you do either CC or swap quickly to kill it.

Tanks must remain in melee range of Serpentrix and not do the other heads, otherwise Serpentrix will continue to Rampage.

The arcane head does extra damage to the boss, so priority on killing and interrupts should be on the arcane head.

Depending on your group comp and how long the fight takes, it can be better to speed boost to drop Toxic Wound, as it will then lead to gaps between the toxic puddles for players to run through without taking extra damage.  Alternatively, you can stutterstep to drop it, but try to avoid doing it immediately around the holes that Serpentrix and the additional heads spawn from.

Warlock gateways to skip cave no longer work.  All other skips still seem to work for Demon Hunters, Druids and Shamans.  You want to aim here when leaping/jumping/etc. 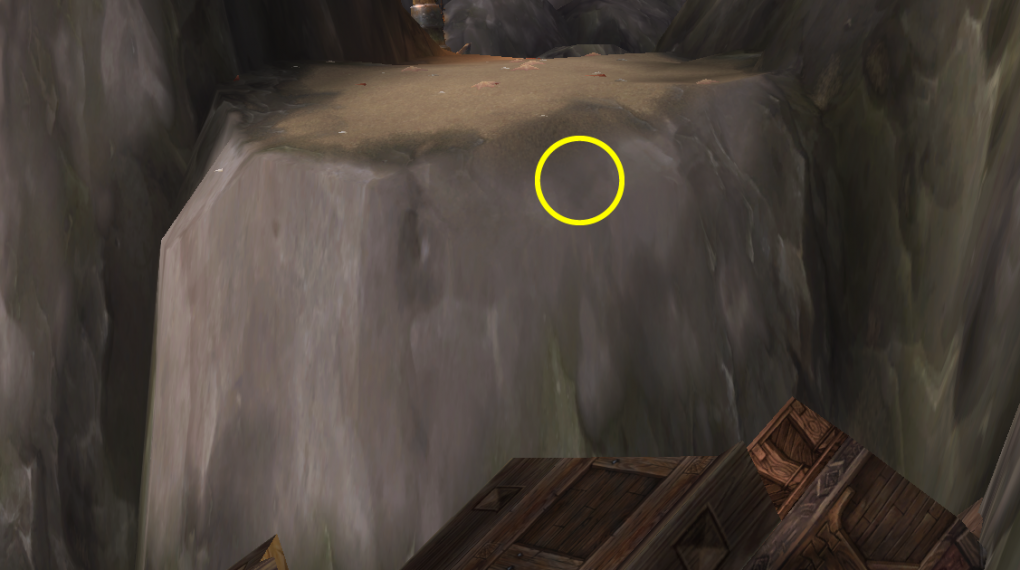 Once there, the person can stand on that spot with a three person mount and the others can jump and mount.  Use the Grand Ice Mammoth (Sons of Hodor Exalted) or Grand Black War Mammoth (rare drop in Vault of Archeron) to save time kicking the NPCs out of the vendor mounts.

Be careful of the lightning strikes when doing the skip.

You can skip the two giants guarding the boss area entrance by having the tank pull them to the left, while the group hugs the wall to the right.  Tank dies then healer can mass rez.

To avoid running out of room on higher tyrannical weeks, you can stack previous quake on top of each other, then move out before aftershock hits.  Be very careful to not run over any of these super stacked quakes during aftershock though.  You can stack one of them solo to be used to quickly burst the Gaseous Bubble from the boss.

This fight is great for both Prydaz and avoidance gear because of all the AOE damage and becomes mandatory for higher keys.

Playing this fight as top down makes it much easier to avoid waves and tornadoes.

Massive Deluge is always spawned on the tank, to the rest of the group should ensure the tank is to their left and they will be out of the circle when it casts to avoid everyone moving.

It is safer for range to NOT be in melee, except for when Crushing Depths is cast.

Crushing Depths is the max HP of the targeted player.  Watching to see gets targeted can help you decide if you need a damage reduction or not.

Player targeted by Crushing Depths can remove weapon equipped (or swap to a low level weapon or a fishing pole) to reduce HP and result in a much smaller hit to the group.  However, the swap must be done immediately or it won’t calculate the appropriate health.  Player will need to be careful to avoid other damage while doing this, since health drops about 50% once an artifact weapon is swapped out.

Many classes can immunity Crushing Depths, such as Ice Block, Turtle, etc. Pallies can BOP.

On high keys, it is often safer to have players save their immunities to solo Crushing Depths.