The door on the left will open after Opera has been defeated.

If your healer has a speed set or some other kind of speed boost (Roar, Wind Rush Totem), your healer can invis pot through both floors of trash to get to the ramp to Opera Event and start the RP.  The rest of the group will turn left (instead of the usual right) and kill that trash, leaving a mob or two up to kill the group at the end if they haven’t already died.  Make sure the group goes all the way to the left so the healer’s mass rez will reach.

Death Knights can take the first spirit for a pet, which adds some damage but also means you save time from having to kill it right then.  The opera RP wait time is a good time to kill it if the DK is worrying about dying later and the spirit killing the rest of the group.  It does have a huge purple ground AOE effect which can be confusing for some during the Wicket Opera Event where both the ground effects on that boss are also purple.  You can also use Rogue’s Shroud of Concealment to skip first spirit.

RP for the Opera even is VERY long.  Send your healer or one of the DPS to go talk to the NPC while doing the bottom hallway trash, then run back and help if neeed.

US and EU often have different Operas each week, even with the same affixes.

Beauty and the Beast

Kill Mrs. Cauldrons first, being sure to interrupt soup spray and leftovers.  Then kill Luminore, Babblet, then Coggleston.  The popular “kill Babblet first” strat is primarily for lower pug keys.

Once Luninore is dead, the fire on the ground no longer does any damage.

Adds casting Bubble Blast can be interrupted and stunned.

The biggest cause of wipes is not having enough Defy Gravity (tornadoes) because someone ran into one early.  If there are not enough tornadoes for Magic Magnificent and there are immunities available, use the immunity.

Both Elfrya and Galindre cast regular bolts, interrupting Flashy Bolt from Galindre is the priority, as Elfrya’s Dreary Bolt only targets the tank.

While still on stage, some classes can stand right on the edge and target one of the dancers below, which will cause most/all of the trash to aggro and can be killed on the stage.  Make sure to LOS the doorway, otherwise some of the mobs can stop in the hallway making it harder to AOE them down.

Be sure to stun the trash as you pull packs.

Be sure to use stuns and AOEs so they cannot cast Firelands Portals.  They summon adds from Firelands and if you end up with multiple summons, the group can get overwhelmed.

Pulling the entire audience is another quick way to get percent, but be aware there is an usher in there.  This strat is becoming very common.

Avoid pulling packs with these mobs unless absolutely necessary.  They charm a player if Oath of Fealty is not interrupted, and this can quickly wipe the group depending on who is charmed.

Trash to Maiden of Virtue

Be careful to not AOE the trash in the bedrooms.

If you have the DPS, your tank can pull all/most of the hallway to Maiden’s room, then LOS on one side to group up the trash to stun/kill.

If you have Rafe up he will almost always target the healer unless he is taunted before his first jump.  You can have the healer position at one end of the room (ie. the kitchen end), jumping from corner to corner on that side as Rafe jumps, while having the rest of the group at the other side of the room.  Then Rafe will rarely damage the rest of the group.  Just be sure you aren’t out of range of the healer.

Garrote: Garrote will always target healer first.  Holy Paladins can BOP and bubble the Moroes Garrote – if they do the first one, then Moroes will automatically target the Holy Pally again for the second. When everyone has stacks of Garrote, a mage can use Ice Block right before the next one goes out, which will remove the stack, then Moroes will target the Garrote-less Mage, which is immune due to Ice Block.  Players can also shadowmeld if they see the cast is on them.

Hunters can frost trap or priests can shackle one of the guests which means you do not need to kill it during the encounter.  However, they will need to recast to keep them trapped throughout the fight.  It is also very easy for DPS to use AOE trinkets and/or abilities to break guests (both player traps and the ones you get in the dining room)  so beware of that.

If you are killing Crispin first, healers should be aware that Moroes will stun them right before Crispin casts his first Willbreaker, leaving less time to move out of the cone.  Popping a personal before the stun as well as being in melee can help dodge the Willbreaker or recover if the healer is hit with it.

If there are issues with the traps respawning or bugging out, there are additional traps located on the far side of the ballroom.  You can also reset the boss to get more traps.

On explosives week, any CC’d guests will still spawn explosives.  They can be LOS, so the best way is to tank on triangle below, making sure people keep LOS: 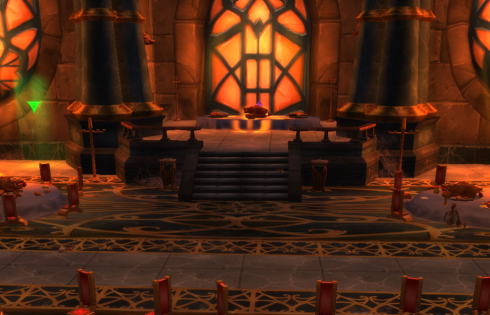 You can also tank on the other side.

This boss can be reset by kiting into the kitchen (although beware of trash in there) or the ballroom.

If you need percent, head to Moroes through the kitchen and kill the trash there.  At the end of the left side of the room you can jump down to get to Attumen to save time.

The tank can use a speed boost to avoid shared suffering, but everyone should be aware that the boss will sometimes cast it twice (or more) in a row.  You can also use an alternating taunt strat for this with one of your DPS taunting the shared so everyone can avoid it.  After he stops casting it, be sure to bring the boss to the middle of the room.

For shared suffering, make sure you know whether the tank can solo or not.  Also, immunities can be used to soak the damage such as Ice Block, Cloak, Turtle, etc.

Right before the boss does spectral charge, ensure the boss is near the center of the room.  This means the charge lines spawn outside of the center circle area.  All players should be in the middle to avoid horses spawning on them and killing them instantly.  If the boss isn’t in the center, try and get close to where the boss was when the phase started, but be aware you may have to dodge through doorways to avoid it.

Avoid using any kind of personal to remove Intangible Presence UNLESS you have the spectral ghost over your head/back, as it causes group-wide AOE.  If you have the spectral on you, be sure how your personal works, as some will remove it just on you (requiring the healer to single dispel everyone else causing the group wide AOE damage with each one) while others remove it successfully from the group.

After killing Attumen, Midnight’s Mighty Stomp does twice the amount of damage.  Players can easily LOS this, so only the tank should take damage.  LOS position: 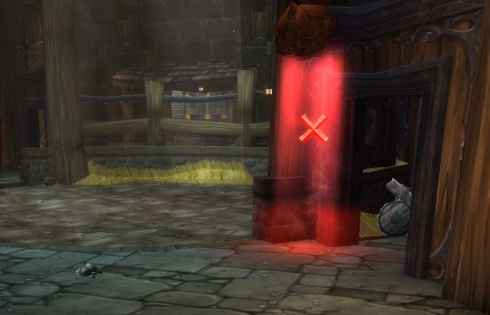 Mighty Stomp can also be outranged after 30y, although the room makes that a bit more difficult depending on boss placement.

If you need to reset, any player can kite the boss out of the stable area to reset.