This dungeon is very unforgiving with the timer, one bad wipe can be enough to miss the timer, especially on some affixes.

You can skip the first add pack by stealthing past or by mounting up and running on top of the skull to the left. Here is positioning:

You can have hunter pets, earth elementals, treants, infernals, etc take the Dark Slash if they taunt right before Dark Slash is cast.

Soaking the puddles prevents more skeletons from spawning and is required on high tyrannical keys.  Players can use immunities to soak.

During the last part of the fight, healers can stand up by the horn so they can spam click it as the boss is about to die.  Just be aware that if skeletons are spawning, they can spawn up there.

The last large mob before heading upstairs, Grimelord can be pulled to the doorway of the stairs and he will either stop casting (bleching) the green sludge on the floors or drop it in tiny puddles instead.

You can also skip Grimelord and the Mariner if your healer is a resto druid that can stealth or the healer uses invis pots to run past and up the stairs – the rest of the group dies and the healer can mass rez.  This tactic is especially useful on higher fortified keys to not risk Mariner deaths, but ensure your healer is out of range of the Mariner’s cast.  You will need to kill everything on the ship deck to do this, as well as the trash before the Mariner.

If you are having issues dodging scythe, use items with speed (such as Chrono Shard, Chrono Shard 2pc, Sephuz or +speed).

Avoidance gear does not help for Cosmic Scythe damage but it does affect Void Snap damage.

You can immunity fragments.  Don’t cancel immunity until after Harbaron finishes casting, otherwise he will simply retarget the player and recast.

If you want to mass pull, pull the mobs up to the area where you killed Harbaron as it gives you much more room for kiting and dodging.  Imperative to interupt fears to prevent body pulling additional packs.

Make sure you have % before engaging because as soon as Skol dies, jumping down to Helya’s deck causes the skeletons despawn.

If your group is wiping, have the tank (or whoever is alive) drag him back to Harbaron’s area.  This will cause skeletons to stop spawning, leave more room for dodging (especially if you leave the pack up on the right side of Skol) and instant rez.  This tactic doesn’t make sense to do as a regular tactic, only to prevent complete wipes.

Placing raid markers over the holes in the deck will highlight them to make them easy to avoid. 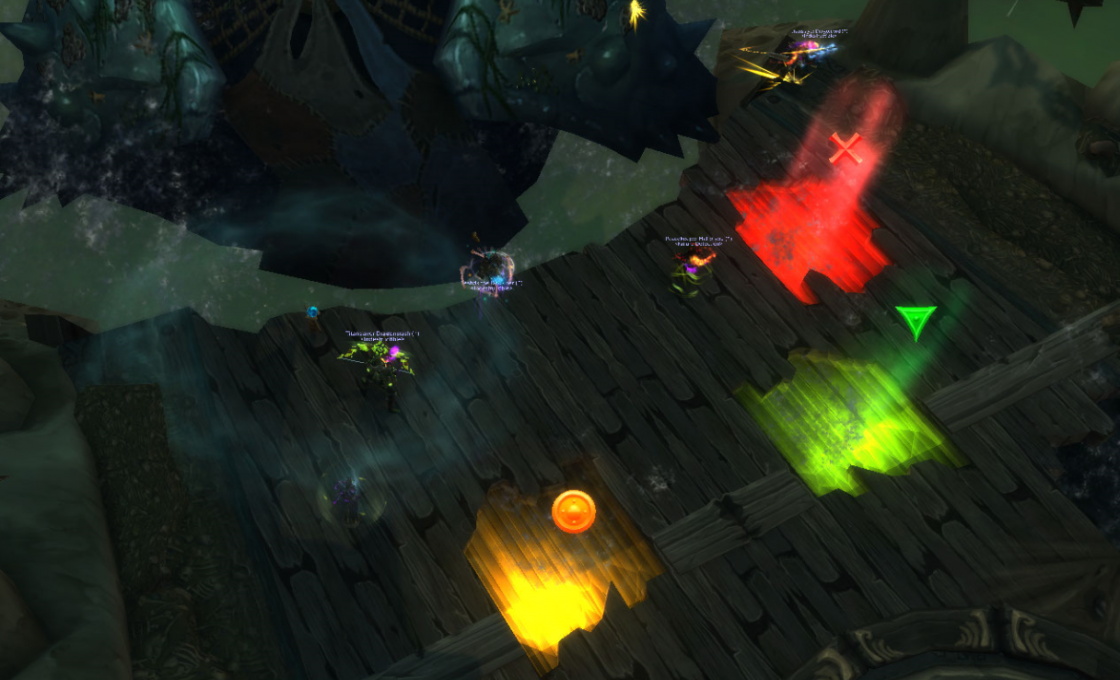 Helya submerges every 90 seconds.  During submerges, it is safest to hug one of the side walls to avoid a hole spawning right in front of you.

Set a interrupt rotation for Torrent.