The Arcway Mythic Plus Tips & Tricks

You can tell which side is the open side by viewing the map as soon as the dungeon timer begins.  Simply look at the map, and it will show a door blocking either the left or right side.  Note that the map will be reversed, so if it shows the pathway open on the right side of the map, that is actually the left door open, and if it is the left side of the map that shows open, it is the right door open. 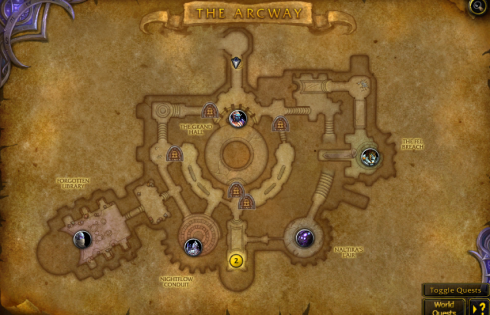 There is an issue where zoning out will cause the loss of enchant/gem stats.  Some have reported it is fixed while others are still experiencing it.

If you want to skip all the trash on the left side until General Xakal’s room, since that trash tends to be pretty dangerous depending on affixes, there are a few options.

If you have a resto druid, your druid can stealth through all the trash on left side to get to the balcony edge in Xakal’s room – be careful going around Chaosbringers.  Where you go in Zakal’s room: 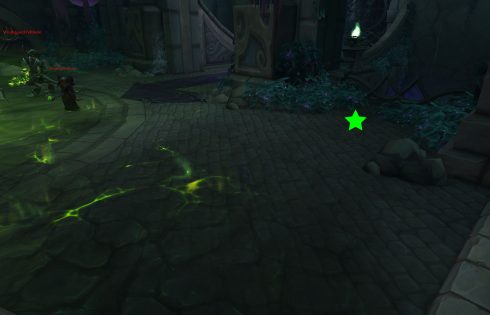 The tank will pick up the adds and the group will run through to the large trash room, but after going down the set of stairs, they go straight and then turn right to go down the second set of stairs into the hallway and die there. View from top of stairs showing route: 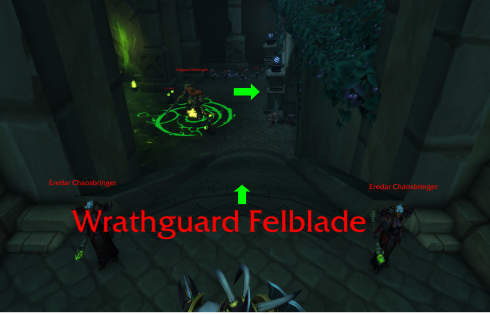 The healer can then mass rez. 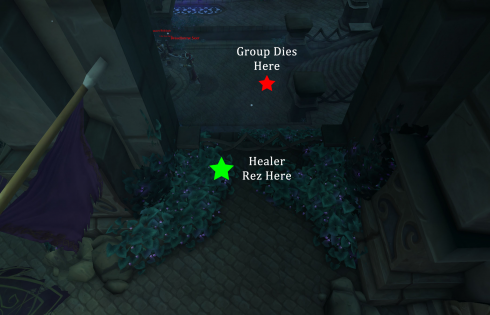 Alternatively, if you have a Warlock to soulstone your healer before putting the key in, a resto Shaman with Ankh, or a healer with a Failure Detection Pylon, you can have your healer invis pot, then mad dash using healer cooldowns to get into spot before dying and trash resetting.

Then you just need to kill the one large trash pack in the room before the boss.

You can have your tank pick up all the oozes and run forward into the area where the last boss is.  While the tank pulls all the aggro, the rest of the group can run to the open doorway.  Avoid pulling the spirit.  Once the tank dies, the healer can use mass rez.

You can also use a rogue with Shroud of Concealment.

Do be aware that this means running back until you have killed first boss may be an issue.  Be liberal with Failure Detection Pylons to compensate if wiping is a concern.

Mark ghosts with icons when you run across them, they have a huge path and will help prevent accidentally pulling an unexpected ghost.

If you end up getting high stacks, you can LOS the ghost to drop stacks.

If you get the left door, warlocks can enslave demon to take a chaosbringer as a minion.  This provides a buff Brand of the Legion which the warlock can use to buff any party member.  However, do be ready to dispel the chaosbringer as soon as he becomes unenslaved.

On teeming weeks, it is useful to let the warlock repeatedly take and kill chaosbringers in harder packs, to make the packs easier, using it as a form of cc.  The teeming pack right before boss is very useful for this.

Do NOT use the Chaosbringer pet on the final boss, as it causes the boss to reset.

Watch the timer, it is easy for the Chaosbringer to start one shotting players if the warlock forgets it is expiring.

Trashes and stuns are your friend.

Prophecies of Doom can be outranged as well as LOS.  Grips can also interupt the cast.

You can LOS the Eye of the Beast cast.  When the player is targeted, they simply go LOS of the Seer and the eyes will not spawn.  Grips can interupt.  If you kill the mobs on the stairs, you can sometimes be above/below the eyes and avoid them.

If you hit 98%-100% enemy forces, all the trash will despawn in the center except for the ghost.  You can either kill the ghost, or you can kill the final boss and then kill the withered in the room by the boss that opens after Advisor Vandros dies.

You can hero the large add pack beside the boss and then pull the boss when adds are dead or close to it, depending on the affixes.

The adds can be CCd.

For higher keys, you will need avoidance gear or CDs to survive the Wicked Slam.

Avoid picking up the buffs when Quarantine is about to come out, otherwise you may die before someone reaches you to get you out of it.

The second cast of Blink Strikes will always target melee DPS, if your group comp has one.

You need to avoid overlapping  Volatile Magic on high keys.

Plan to drop Nether Link on the sides so you don’t lose much space, which makes spreading for Volatile Magic and dodging the discs much easier.

Accelerating Blast: If not interrupted, Mages can Spellsteal this and Shamans can purge it to remove it.

Stack up when Force Bomb is casts, this stacks up the two bombs so you only have to run through one instead of two, and it prevents being caught between two.

If you accidentally pull the Ghost pat, you can LOS the stacking dot during the fight by going around the pillars.  It will despawn when you transition to P2.

P2: Depending which route you get, you may not have to kill any ghosts.  Some will have a small path, and it is better to wait a few seconds for it to pay so you can run around it than having to kill it.

Grievous weeks: Make sure your group is above 90% health before the transition, otherwise the player health will continue to tick down while grievous stacks go up during that few seconds of phase transition.